Skip to content
Marian Mahoney, LGT’s Vice Chair, explains why becoming a member of the organisation’s Board of Trustees was one of the best things she ever did – and encourages other Travellers to do the same

I’d been an activist for years before I got involved with London Gypsies and Travellers. We had a women’s group in Tower Hamlets where I lived at the time: we were fighting to get repairs for our site which was 35 years old. We managed to get a refurbishment grant and then discovered the whole site was under threat from the Crossrail development.

There was no time to give us another site, so we had to get ourselves together and fight. We discovered there was a support group called the London Gypsy and Traveller Unit (now London Gypsies and Travellers) and so for ten years we worked with them to fight everything that was happening to us and the prejudice that went with it.

We went to the High Courts of Justice, we went to Westminster to put in a petition and I had to stand up in front of 12 MPs and beg them to give us the 19 homes that were being taken from us. We were told we would have to get our wagons on the road because there would be no site.

We constituted a residents’ group, and I got on a computer course and passed letters backwards and forwards. It was good that LGT was there. Without them, we wouldn’t have had anyone to stick up for us, and tell us our rights and what we could do. I said to Debby from LGT, I don’t know how you do your job because it’s so hard trying to please everybody.

We learned so much about what was happening in the outside world and what we were entitled to. We got quite brainy, to be honest. 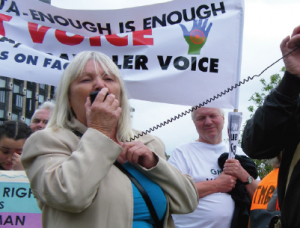 Thanks be to God, after ten years of hard work we got our sites. We all started fighting the council for other things, so we got our own site licences and a waiting list and waiting list criteria. We achieved so much we couldn’t believe it. In fact, some sites use our licence and waiting list as a model. People realised you need to fight for your rights.

When that died down, Debby said she was short of trustees for LGT, and would love a Traveller to be on the Board of Trustees. So I said I’d give it a try. That was in 2007 and I’m still a trustee and really enjoy it. And we’ve gone out and tried to find more trustees from the Traveller community. We advertised and we really have a good board now. But we’d still like more representatives from the community.

I get a lot from it. I find out what’s going on in my community. I know where the funding is coming from and going to, and can say how I think they should be using that money for the community. We’ve done so much.

Being an activist has really opened my eyes to what goes on in the Traveller world and what goes on in Parliament. When we go to meetings and conferences we’ll stand up and speak – and you’re really noticed when you say you’re a Traveller.  I’ve met hundreds of people – academics, MPs, mayors, famous people – that I’d never have met otherwise. I can’t believe what I’ve learned.

I would just love for more trustees to be Travellers because travelling people have so much brains that they don’t use and there’s so much they could contribute, so much imagination. I’d especially like young ones to be trustees so that they can see what’s going on in their community, in their support group and get to know what their rights are – what they’re entitled to and what they’re capable of doing for themselves if they want to.

You learn that there’s all sorts of things you can help with, for the community. I think it makes it easier for the other trustees that I’m a Traveller. They trust me and can say anything in front of me. They know I have a good brain and they’ve picked up on many of my ideas. There’s no prejudice there whatsoever. We have great fun as well.

Audio: Mena and Tracie talk about self-care and mental health

Listen to their conversation here:     You can also watch this video for a shorter version

Video: Tracie Giles on her early memories of travelling