I’ve just turned 24 years young: a ripe and tender age, I hear many gorje (non-Romany Travellers) say. The time for independence, travel, degrees, proper jobs and mortgages. But some of my family have a different take, often declaring: “Ain’t it about time yer settled down Bet? Find yerself a nice travelling man to look after yer?”

Those that know very little about my culture, or have been brainwashed by the racist attitudes of some national newspapers, might only judge the surface of comments like that. But things are a bit more complex than the fairy dusting of the surface.

The amount of often undocumented oppression my people have had to face in the past, and still face, has inevitably led to a chain reaction of deep rooted mentalities in my culture. They have been conjured from centuries of fear, trauma, exploitation and neglect. 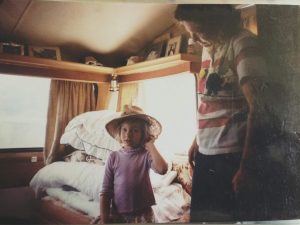 Ragged beyond my years

I feel ragged and aged beyond my years, because of the hardships that I have encountered throughout my young life – witnessing time and time again unjust behaviour, segregation, severe depression, illness, the rise of suicide. Although there are few statistics, because of poor data collection by government, there is sufficient evidence that Gypsy Roma Traveller (GRT) people in the UK and Ireland have a 10 year shorter life span than non-GRT. This needs to be investigated and prioritised under the public sector equality duty.

Up until last year, when I realised there are people fighting our corner, I had never been made to feel proud of who I am by anyone other than my family. I’d had enough of distasteful comments, racist remarks and being made to feel the mangy dog in society, the vagabond, the nuisance. So I delved into the world of activism, equality, legislation, case work , and during my research I stumbled upon London Gypsies and Travellers.

My mind was blown

I phoned, said I wanted to volunteer, get involved and do something! So I was invited to the launch of LGT’s postcard campaign surrounding the new London Plan at City Hall. What a glorious event it was! I’d never seen anything quite like it. Gypsy, Roma and Traveller activists, scholars, politicians. And all built around the LGT “We are all so many things…” campaign to dismiss stereotypes surrounding our culture. Talks of new sites! My mind was blown.

The campaign was a game changer for me – and it may have changed my career and life course too. I was inspired. For the first time, I was made to feel accepted and appreciated by kennick (non-GRT) communities. 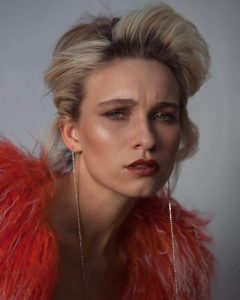 I was considered for one of the new roles at LGT, and now I am working here as Youth Engagement and Campaign Support Worker! My background is in performance art and I’m also a qualified specialist hair and makeup artist, so working in an office has been quite the change of scenery. I am here to delve deeper into the rabbit hole and hold ignorance and unjust behaviour to account – to strengthen our voice and help it be heard in its purest and most unique form.

That isn’t an everyday opportunity, and that also means that I have to set the standard and make the most of this role. It’ll take a good bit of trial and error, but I feel very appreciative for having this role. Be the change you want to see. And change surely is coming.

Pictures. Top: In front of a bow top wagon at Appleby Horse Fair. Centre: with Mum, Rachel, at the age of five. Bottom: Modelling shot, photo by Luke Nugent.

Audio: Mena and Tracie talk about self-care and mental health

Listen to their conversation here:     You can also watch this video for a shorter version

Video: Tracie Giles on her early memories of travelling